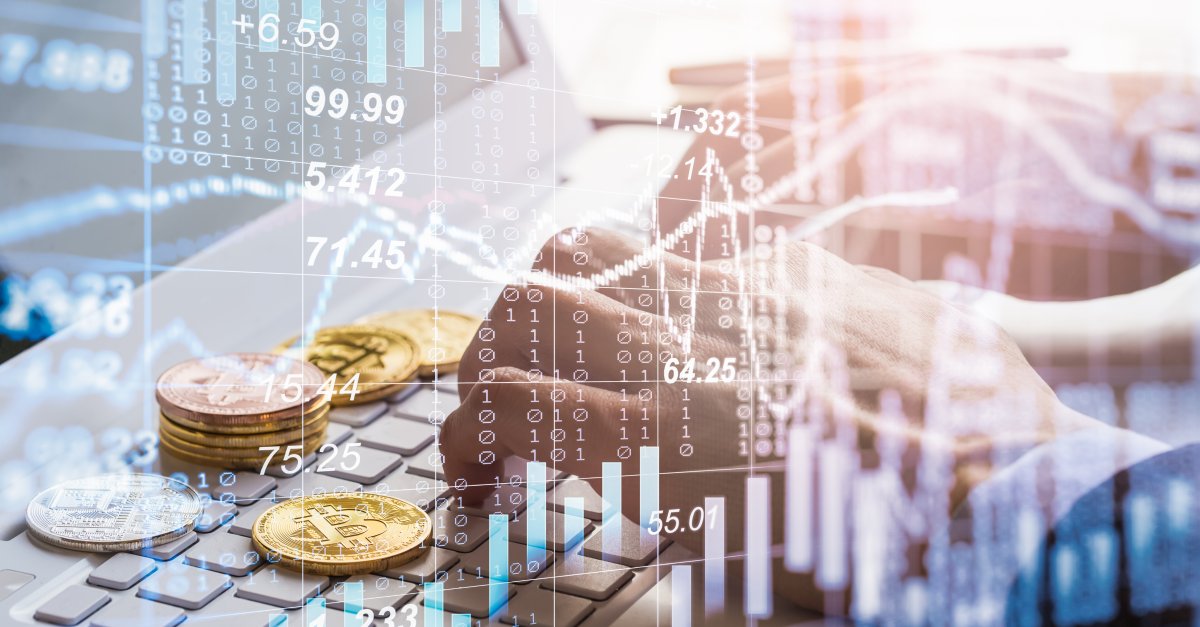 Called Currency Of The Internet, COTI’s name says it all. Some have identified it as one of the most undervalued crypto’s on the market as COTI seems ready to do business with everyone, working alongside fiat, not against it.

A review of what the COTI cryptocurrency project aims to do, as well as its recent progress till date may offer a glimpse into the coin’s future. And the fact that COTI’s future Ecosystem Treasury is being built from ground up to be regulation ready makes it more likely to succeed over the longer term.

No doubt, the Crypto flash crash that took place during the first week of January 2022 caused a double dip for the COTI. Following an initial decline of 17%, it staged a small rally before falling again on 7 January to $0.3485, near its pre-Christmas level.

COTI is currently ranked in position 173 on the cryptocurrency league table with a market capitalization of almost $300m as at 16 January (today).

The COTI protocol lets business and government issue their own coins via blockchain technology for decentralised payment processing. Its native cryptocurrency is also named COTI.

Developers at COTI are working in partnership with their peers at the Cardano blockchain and ADA cryptocurrency. All through 2021 COTI announced several new partnerships and new merchants for the ADA Pay digital payment platform.

On 15 December it announced a partnership with ADA Handle, an NFT-powered naming solution for the Cardano wallet address, in which the pair will “explore the possibility of allowing support for Handle address resolution directly within their ADA Pay platform”.

On 21 December it announced it was partnering with AdaSwap, an ecosystem aiming to establish the first decentralised exchange on the Cardano network.

On 28 December it said it had formed a partnersip with ErgoDEX, a decentralised non-custodial exchange that “facilitates liquidity transfers between the Ergo and Cardano networks”. It added that COTI and ErgoDEX will work together to determine ways to integrate Djed, the Cardano-based stablecoin with ErgoDEX.

This COTI coin review looks at the network’s recent developments and the movement of the cryptocurrency price to help you decide whether now is the right time to add it to your portfolio.

So, what is COTI? COTI is a fintech platform that uses blockchain to run a range of products, including payment processing, financing, white label payment systems, loyalty programmes and cross-border remittance technology. Organisations can build their own payment solutions and digitise any currency to create so-called “stablecoins”, which are pegged to physical currency.

The COTI network is based on seven key elements of operating an effective payment infrastructure: 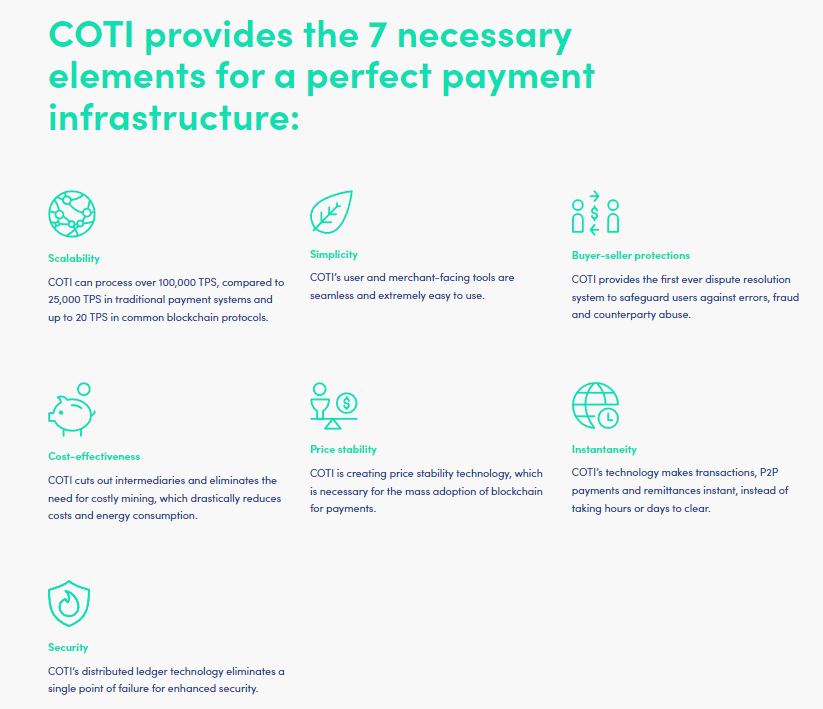 What are the latest COTI developments?

On 25 October COTI announced a partnership with CardWallet, a DeFi and wallet system for Cardano, to bring a non-custodial wallet and an “easy-to-use” payment platform to the CardWallet community. The company said it will “work together to integrate the ADA Pay solution to CardWallet to provide a robust payment system for CardWallet’s users.”

COTI is to become the official issuer of Djed, a new decentralised finance (DeFi) DeFi-focused stablecoin for the Cardano network, which should provide a DeFi tool for operations and avoid transaction fees. The new stablecoin will be based on an algorithmic design using smart contracts to ensure price stability and providing an instrument for DeFi transactions, said COTI CEO, Shahaf Bar-Geffen. “The stablecoin is designed for paying transaction fees on the Cardano network in order to avoid “volatile and exorbitant gas fees” and make transaction costs more predictable,” he said.

In September came the announcement that it was working with OccamFi, the Cardano oriented DeFi suite solution provider, to explore strategic co-development initiatives and opportunities to merge the launchpad capabilities of its OccamRazer with the ADA Pay solutions offered by COTI.

COTI has also announced a partnership with payment processing gateway Simplex. This will enable it to offer bank accounts and Visa debit cards on the Cardano blockchain to people in the UK and European Economic Area said the company, adding that “these financial tools will help address economic inequality”.

Earlier in the year, cFund, the venture fund for the Cardano ecosystem, invested its first $500,000 in COTI in April, strengthening the relationship between the projects. Using COTI’s payment processing technology, ADA Pay allows merchants to accept the ADA cryptocurrency as payment and convert the proceeds into 35 fiat currencies instantly to avoid exchange rate volatility. Bricks-and-mortar stores can use a point-of-sale QR code scanner to process transactions in ADA.

COTI is currently working on a project with Cardano that it says “will be very instrumental in Cardano’s ecosystem.. as Cardano grows, so will COTI”.  COTI reported the latest update on the relationship on 8 December.

COTI operates a cross-chain bridge. In June, developers tested a reprocessing procedure that allows the bridge to automatically reprocess Ethereum-based ERC-20 COTI coin to native COTI delayed transactions, as well as increase scalability and improve flows from the native coin to the Ethereum version.

On 2 September, COTI’s developers outlined a growth plan “to bind everything that we do and new things that we are planning to do into one coherent system and evolve our offering from payments to a fully-encompassing next-generation financial system”.

The developers said: “Our upcoming Treasury model combines the best of Defi and COTI’s staking 3.0 program.

“The Treasury will grow as our core services continue to grow, while introducing new services that will grow the demand for $COTI and will streamline $COTI fees to the Treasury.”

With the listings launched, the COTI network upgrade to Mainnet 2.0 was launched on 2 November adding new features and increase scalability. The developers are designing a Mainnet 3.0 upgrade that they expect to happen “roughly a year from now”.

On 15 November COTI announced a partnership with Centaurify, an NFT and smart contract platform, with the aim of “tokenising” tickets for NFT event tickets, digital collectibles, and more. Centaurify will implement ADA Pay, which is powered by COTI, to make it possible for users to pay with their ADA tokens.

On 24 November it announced a partnership with decentralised finance (DeFi) developer SundaeSwap Labs “to explore ways to implement the Djed stablecoin — the first stablecoin on Cardano — with the SundaeSwap decentralized exchange (DEX)”.

In a tweet on 25 November it announced a “new community node will be added on 1 December”. Called The Prime Node it brings the total staking volume to 160 million. It is the 15th COTI Community node and the 22nd in total.

On 15 December it announced a partnership with ADA Handle, an NFT-powered naming solution for the Cardano wallet address, in which the pair will “explore the possibility of allowing support for Handle address resolution directly within their ADA Pay platform”.

On 17 December it said that COTI would, along with four other cryptos, will be listed on India’s largest exchange, CoinSwitch Kuber.

On 21 December it announced a partnership with AdaSwap, an ecosystem aiming to establish the first decentralised exchange on the Cardano network.

On 22 December COTI announced that its native coins could be converted into Euros in a user’s COTI bank account.

On 28 December COTI revealed in a tweet it had teamed up with ErgoDEX, a decentralised exchange “that facilitates liquidity transfers between the Ergo and Cardano networks”.

COTI price analysis: what is the COTI coin news?

The price of COTI skyrocketed during the first quarter of this year, reaching a new all-time high. The coin surged from $0.0470 on 1 January to $0.5730 on 23 March. It then dropped back in line with a retreat in prices across the cryptocurrency markets.

What does the latest COTI forecast suggest about the direction of the market for the coming years?

On 7 January, forecasting service Wallet Investor’s COTI crypto price prediction estimates the coin will trade around $0.72 at the start of 2023, and may then climb to $2.043 in five year’s time.

Gov Capital’s COTI price prediction forecasts the coin will trade at $0.97 in a year’s time and climb to $5.54 in five years.

It’s important to keep in mind that cryptocurrency markets remain extremely volatile, making it difficult to accurately predict what a coin’s price will be in a few hours, and even harder to give long-term estimates. As such, analysts and online forecasting sites can get their predictions wrong.

This provides a COTI overview but we recommend that you always do your own research, and consider the latest market trends, news, technical and fundamental analysis, and expert opinion before making any investment decisions. And never invest more than you can afford to lose.

Is COTI coin a good investment?

Prices for altcoins like COTI are highly volatile, offering a heightened risk and reward profile for investors. You should do your own research based on your personal risk tolerance. It is crucial to remember that past performance is no guarantee of future results.

According to the predictions, there is potential for the COTI price to continue rising in the coming years, particularly if other cryptocurrency prices remain bullish

According to cryptocurrency prediction sites, COTI may reach $1 in the next few years, depending on how the protocol develops.

What affects the price of COTI?

The potential for the COTI platform to drive growth in the adoption of cryptocurrency payments at traditional merchants, as well as the ability to process cross-border remittances on the blockchain, could drive up the value of the cryptocurrency as the native token. Sentiment on the broader market, led by bitcoin, is also likely to drive the COTI price.

Best Tips For Cryptocurrency Trading In 2023