With almost everything becoming digital, currency appears not to be catching up. Blockchain-based cryptocurrencies have been hailed as the perfect solution to not just digitizing currency but also to providing a simple, safe, secure, fast, cost-effective, scalable, robust, seamless payment and financial system.

Truth however is that blockchain has not yet proven to be that ultimate solution hence, cryptocurrency mass adoption is being delayed. This is where COTI is making all the difference. COTI provides the seven core elements for a perfect payment infrastructure, powering both fiat and crypto.

Year 2021 was undoubtedly a uniquely significant year for COTI in its strides toward the vision of creating the ultimate Layer 1 for payments, but 2022 is expected to be much more significant as COTI’s 2022 roadmap unveils major initiatives for the year.

COTI is building the next generation of financial and digital products encompassing various aspects of the new digital economy. It is building from the ground up, from Layer 1 to Apps, to serve as a fully encompassing ecosystem.

Crypto needs a Layer 1 that is suitable to the unique needs of consumer-merchant payments, and COTI provides exactly that with its DAG based Trustchain. COTI will also build all the necessary tools for mass adoption by providing wallets, banking solutions, processing tools and more.

This year, COTI takes a huge leap forward by opening up to issuance of more tokens on top of it Trustchain, using the unique MultiDAG 2.0 layer. The ability to issue tokens on top of a DAG infrastructure is unique to COTI and will allow developers, merchants and enterprises to issue tokens that inherit Trustchain abilities like great scalability, high throughput, low cost and off the shelf tools for payments like COTI Pay Business.

Once MultiDAG 2.0 is on Mainnet, COTI will be ready to launch multiple tokens such as a governance token for COTI’s treasury, the first enterprise token, a payment token on top of the Trustchain and more. These will obviously grow COTI from a one coin network to a Layer 1 with multiple tokens on top of it, used by consumers and merchants around the world.

If that’s not enough, this year COTI will also issue the Djed token, Cardano’s formal algorithmic stablecoin. Djed is highly expected by the Cardano ecosystem and will be widely integrated by DEXs, wallets and dApps on top of Cardano.

COTI’s ecosystem growth will be highly rewarded for COTI holders both in the form of the demand to COTI and also by rewards funneled to the Treasury and to COTI stakers.

With the recent release of COTI’s first iteration of its Treasury, which was a huge success, it plan on continuously developing the Treasury throughout 2022.

Given the agile, fast-paced environment of both COTI and the crypto economy, COTI has released some high-level frameworks that will guide some of its strategic milestones for 2022. More details and technical insights on each of these products will be released to COTI community as it approaches the final launch. 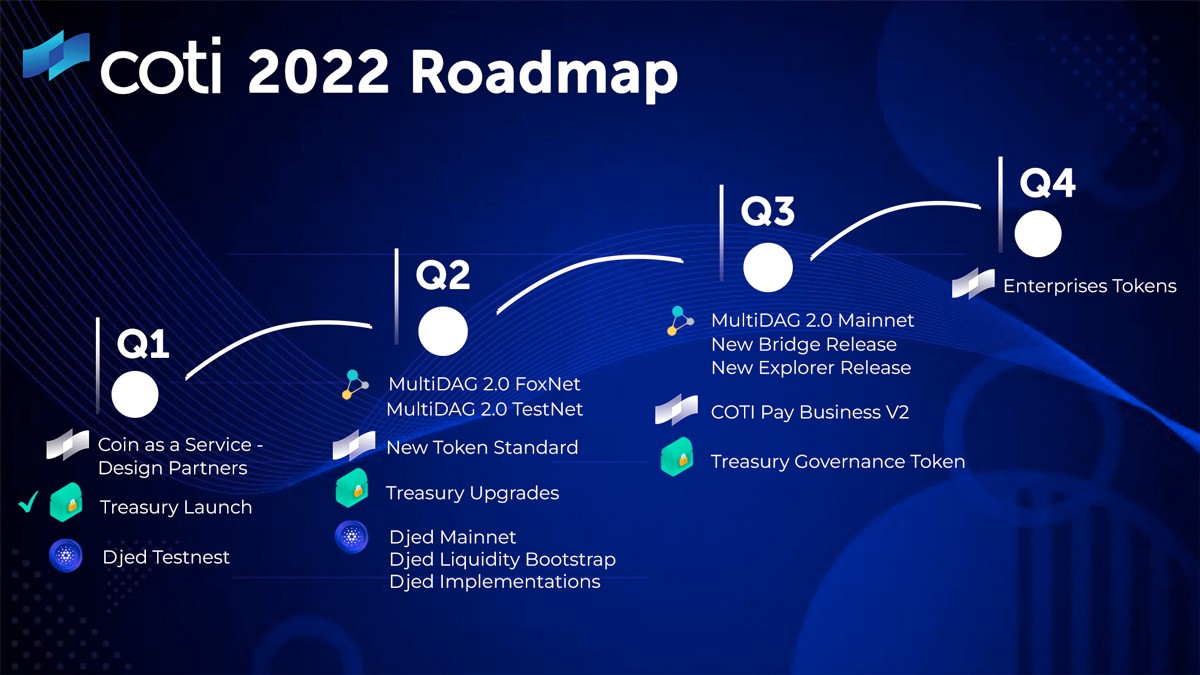 Following the release of Trustchain 2.0, COTI is already working on MultiDAG 2.0. Through MultiDAG 2.0, developers, merchants, and enterprises will be able to issue tokens on the Trustchain and then transact using these tokens across wallets like VIPER and COTI Pay Business, and all COTI’s other products and partner ecosystems. COTI is very excited about this launch because the MultiDAG 2.0 infrastructure is a unique solution that no other Layer 1 blockchain technology can offer.

In April 2022, COTI will be releasing a FoxNet followed by a Testnet towards the end of May. Once the Testnet is launched, COTI will define a new token standard, relating to the $COTI Native coin in the same way ERC20 tokens relates to $ETH.

Since such tokens will be issued on the COTI Trustchain protocol, utilizing them in transactions will lead to significant advantages like low transaction fees and high scalability.

In Q3, COTI will then be launching the MultiDAG 2.0 on Mainnet.

To accompany this launch, it will be releasing new versions to both the bridge and the Trustchain explorer – both of which will support and improve the technical development capabilities of the MultiDAG.

Releasing this upgrade will be one of the major highlights of COTI’s 2022 calendar year and will be providing frequent updates to the community on our progress.

Coin as a Service

As COTI continues to build the ultimate Layer 1 for payment, it sees the huge need for innovative and technical payment solutions for its enterprise clients. Following the Mainnet release of MultiDAG 2.0, COTI will be offering their enterprise clients to utilize the MultiDAG technology to issue stablecoins and other digital currencies on their terms.

Some of the benefits of this service to COTI clients include:

Throughout Q1, COTI will be working extensively with its design partners and its first major enterprise client to customize the product based on the client’s requirement – this case study will be presented to the community once finalized.

Following the release of the Coin As A Service offering, COTI will be launching the next version of COTI Pay Business. Through the COTI Pay Business V2 product, merchants will be able to utilize new COTI Native assets as payment methods across retail and merchant transactions. Given the secure and innovative infrastructure of COTI’s Trustchain and MultiDAG, this will enable merchants and businesses of all sizes to take advantage of the technology at limited costs.

The Treasury is a very exciting concept for COTI because it seamlessly integrates the rewards from COTI’s ecosystem products and services into one platform. Through the Treasury, users can deposit $COTI in a pool and get rewarded for their participation. When users deposit (stake) $COTI into the Treasury, they are entitled to a share of the overall Treasury pool, which will continuously grow as more fees are collected from the COTI product ecosystem.

The COTI Treasury successfully launched on February 1st, 2022. Since then, there have been more than 330,000,000 $COTI deposited into the Treasury.

Following this recent launch, COTI will keep on updating the Treasury with more functionalities and features that will improve the overall user experience. Some of the features will be available during Q2 and some of them in a later phase.

You can learn more about COTI’s Treasury here.

COTI will be sharing more information in the coming months, and encourages its community to actively participate in the Treasury to become eligible to receive the governance token when it is airdropped!

Cardano and COTI have been working together on releasing Djed since it was announced during the Cardano summit last year. COTI has implemented all the necessary groundwork for a successful launch and continues to explore multiple partnerships to ensure Djed’s full integration and utilization across the crypto ecosystem.

In Q1 2022, COTI will be in a position to launch Djed on Testnet. Upon launching the Testnet, an external security audit will be performed. After receiving the results of this security audit, Djed will move on to the Mainnet, which is planned to be released by the end of Q2.

COTI has developed strategic partnerships across over 10 DeFi and NFT protocols, that include SundaeSwap, Aada Finance, Indigo, DOEX, AdaSwap, ErgoDEX, and lots more. These integrations will ensure Djed is adequately utilized once launched while creating an increased use-case for the stablecoin across multiple platforms. Following the mainnet launch, COTI will shift focus to managing Djed’s liquidity bootstrap and ecosystem implementations. Be on the lookout for more details regarding Djed.

To coincide with Djed’s launch, COTI will also be releasing Djed’s algorithmic reserve coin – Shen. Through this reserve coin, Djed users will be able to contribute to its algorithmic mechanism by providing appropriate liquidity for the peg ratio while receiving a share of the transaction fees as an incentive, while $ADA remains the collateral in the system.

COTI recently published a brief overview of Shen here and both product teams are making good progress on the technical development side. Shen will be launched on the same date as Djed’s Mainnet.

2022 is the year during which COTI’s network will exponentially grow from one coin to multiple tokens: Enterprise tokens, Merchants tokens, Governance token, Djed and more.

COTI has set ambitious goals for 2022 and encourages it everyone to follow their channels to receive real-time updates on new developments. COTI will also be hosting a lot of AMA’s, competitions, and many more activities in the coming weeks.

COTI has been and remains grateful for its community’s continuous support!

2022 is the year COTI achieves even greater heights.